I look forward to the New York State Sheep & Wool Festival in Rhinebeck on October 19 and 20, where I'll sign books, thanks to Merritt Books of Millbrook. Handsome sheep, gorgeous knitting, multitudinous wools and yarns; along with authors of kids' books, books about wool, and books about country living. I also look forward to the scrumptious Cortland apples.

On November 2, I'll be at the Superior Book Festival in Sault Ste. Marie, Michigan. It will be a day for all ages of young readers, with authors  Carrie Pearson, Johnathan Rand, Janice Repka, Gretchen Preston, and Lizbeth Jenkins-Dale appearing.

The sun came out, crowds came out, and some post-Notre Dame/U-M game fans were hoarse from the night before as the 11th annual Kerrytown BookFest got underway last Sunday. Ruth McNally Barshaw, Shutta Crum, David Catrow, and I gathered in the Kerrytown Concert House for a session called  "Picture Books from Inception to Publication."

Ruth, the moderator, handles both art and text in her Ellie McDoodle series, while David handled the art for Shutta's accolade-winning new book, Dozens of Cousins. So the speakers had a variety of relationships with putting words and pictures together.

Often people assume that a writer picks an illustrator, or tells the illustrator what to do. But in traditional publishing, the publisher typically chooses the illustrator and works separately with that person. There are notable exceptions, and family writer/artist teams. But as the panel said, there is a kind of editor's alchemy in bringing the two separate parts together. One thrill of getting a picture book published is in seeing how the artist has expanded on what you wrote. Growing up with a visual-arts background, I have always been able to see what could be on the page--but then the artist brings a new dimension.

Another thrill is having your work mean something to a reader. An audience member explained that her young foster son had never responded to books until my sheep couldn't get their jeep to go. He got it! What a privilege to learn something like that in a festival program!

Shutta and David had the privilege of meeting for the first time at a BookFest gathering. Here they are after the panel discussion, with Dozens of Cousins. Ruth went on to give her annual drawing demonstration for kids. I sewed a cover onto a copy of poems by the festival's children's authors, and listened to discussions of "A Mysterious Sense of Place" and "Cherchez la Femme," on a woman's point of view. 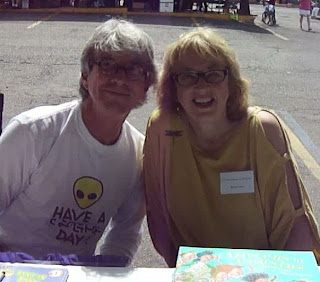 Thanks for a great community effort!

The Craft of Printing

It's not often that I get to be part of a hand-made book--if you don't count the comic books I drew when I was a tween. I'm pleased to be one of the poets featured in a small book that visitors can put together at the Kerrytown BookFest--check out the August 21st entry on their Facebook page to see the cover you can print. The festival emphasizes the craft of the book, and the poetry project is a hands-on way to become part of that craft. 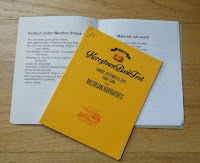 My grandfather was art director of a color printing firm, as well as a watercolorist and printmaker, with a Ben Franklin press in his basement. He helped his grandchildren produce their own prints on it. I printed a portrait etching, and a woodcut of Aesop's fox and grapes. I have some of Grandpa's woodcuts, and I think his "B. Franklin, Printer" proof would be right at home at the festival.

For an overview of the Kerrytown BookFest, here's an article from annarbor.com.
Posted by Nancy Shaw at 8:04 PM

Each year I'm one of many helpers setting out the wares at Ann Arbor's AAUW Used Book Sale, in a vast roomful of tables at Washtenaw Community College. Carton after carton comes out, and we have to practically wedge the books into place, held in by a bookend here, a cut-down cartonful there--well-thumbed paperbacks, pristine hardcovers, specially-priced rare volumes, and books that are not rare at all. Volunteers have been working all summer to sort the thousands of donations. I usually work on the children's-book table, as I did today.

The sight of so many titles, now divorced from their owners, makes me a little melancholy. Not every book stays beloved. And with all these titles clamoring for attention, why try to publish one more? But I believe in recycling, and here's a way to get books into new hands, raising scholarship money on the way. One year, the organizers let me fill a grocery bag with gently-used books to send to SCBWI's efforts for kids who had been displaced by Hurricane Katrina.

Besides, I keep finding things I want, like Janet Schulman's 20th Century Children's Book Treasury. Travel books. A classic story in Spanish translation that I could imagine my character Elena reading. I bought a book of cut-out animal masks one year on impulse, and later used it to play a raccoon in a Raccoon Tune skit.

If that odd title calls out to you, reach for it. You could be its new soulmate.
Posted by Nancy Shaw at 1:41 PM

Thanks for visiting my blog, where I'll have announcements, pictures, and more.

LINKS - See what these authors and illustrators are up to